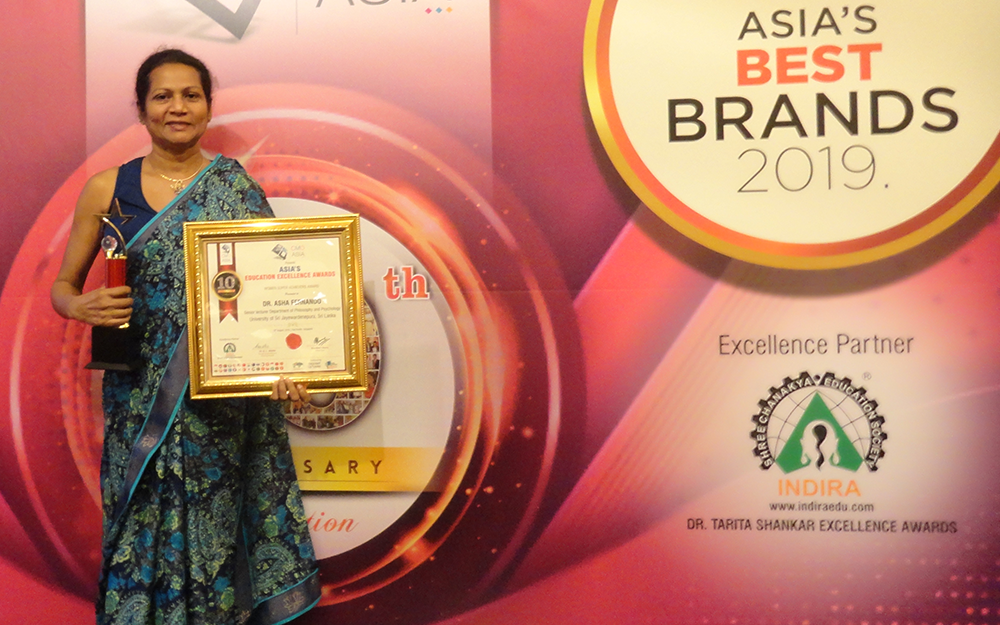 Dr. R. Asha Nimali Fernando, Senior Lecturer (Grade 01) attached to the Department of Philosophy and Psychology, the Faculty of Humanities and Social Sciences has been awarded the ‘Women Super Achievers Award’ and the ‘Innovative Leader Award’ in 16th August 2019- (Singapore) at the Asia’s Education Excellence Awards which was presented by the World Education Congress, CMO Asia with CMO council as its Strategic Partner and Stars of the Industry Group as a research partner. The awards of the highest stature are presented to individuals and institutions who have surpassed several levels of its excellence and set an example of being a role model and exemplary leadership, individuals behind the institution who are building their institutions through leadership, innovation, academic and industry interface and supreme objective of building future leaders.

Dr. Asha was awarded as the ‘Women Super Achievers’ due to the service that she has been doing for the society as a scholar who is doing research under the fields of Philosophy and Psychology. She has many experiences from around the globe, as she has gained the chance of presenting what she has done academically to the international audience many times. And still, she is working on several projects in the University of Sri Jayewardenepura instead of her service as a senior lecturer in the Department of Philosophy and Psychology.

The Innovative Leader Award was awarded to Dr. Asha for her project titled “Ceylon Smart Village (Introducing a digital and ethical framework for development” which was first introduced at the Invention and Innovation Exhibition organized by the University of Sri Jayewardenepura in respect to the 60th anniversary of the university. The objective of the ‘Ceylon Smart Village’ is to bring the technology to the village with the system to evaluate the problems of the village level, and to achieve the development as a collective effort within the state.