It was after 11 years, Sri Lanka was able to win this award after winning previously in 2005 and 2006. The team of delegates from Sri Lanka won a total of 3 Gold Awards and 7 Merit Awards and emerged as the Third in the overall Tally out of 15 countries in the Asia Pacific region. Asia Pacific ICT Alliance Awards is a competition held annually to appreciate the contributions towards technological advancements in the Asia Pacific Region where nominees from over 15 countries compete to be the best in the region under 17 different categories.

The Innovation Invention and Venture Creation Council (IIVCC) of the university-sponsored Mr. Dulan Dias to participate in this international competition. 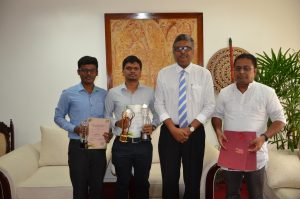